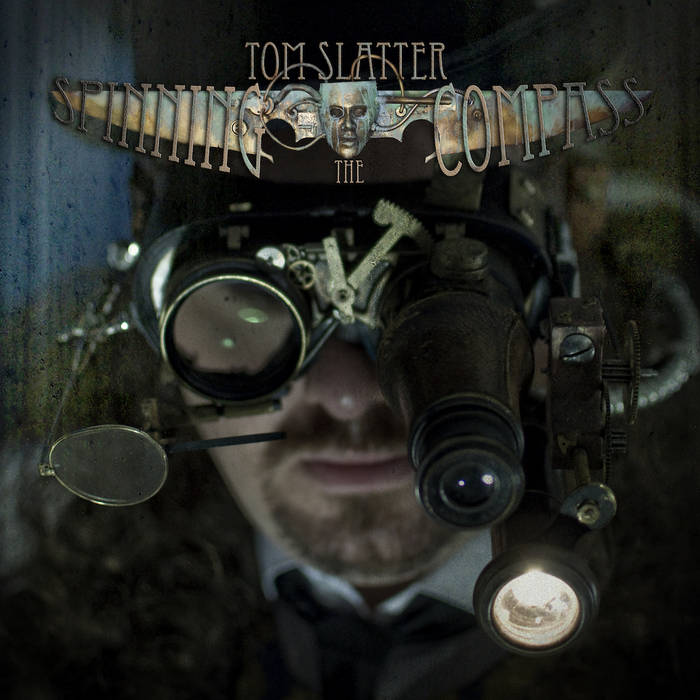 Sven B. Schreiber Although this item is available for purchase to everyone, I received it for free as part of my "Immoral Supporters" membership. Well, not exactly for free - there is some immoral membership fee, which helps Tom to feed his cats, but... yeah, I guess you know what I mean. I didn't want this album. Never would have purchased it. But heck, it was a bargain, so I downloaded it and... well, it's a great album! Really, quite unexpectedly! In fact, I guess it's one of my favorites now. So let me check out the other junk I got for selling my soul to Tom. OK OK, I just gave him my credit card number, but that's about the same... will be back soon... Favorite track: The Man Who Learned To Fly.

Spinning the Compass is my first solo album. Originally released in early 2010, here it is remastered and in places remixed.

I had not planned on going solo in 2009 when I started working on these songs. I was still doing silly things with Comrade Robot, and at the time that was my main musical undertaking. But as part of February Album Writing Month 2009 I had written a few songs that seemed to fit into a steampunk theme, so on and off over that year I put things together.

It just so happened that independently at the same time, my brother Joe was also working on steampunk projects, particularly his 'Oldroid' models, so there was a ready made set of photos and ideas to use as artwork.

Spinning the Compass is about body horror, bad dreams and machines that get in the way or substitute for real love. Mechanism talks about love gone wrong, I Still Smile about latex and rubber alternatives to human contact, the title track is about being lost in a contracting world that doesn't make sense and threatens to disappear.

Nevertheless, it is to me a happy album. It was recorded cheap mics and even cheaper software, and I didn't really know what I was doing. It received my first bad review in which it was referred to as 'an experiment too far' (and a few good reviews too) and I learnt a hell of a lot from making it.

It is also where the Seven Bells John saga started. The Steam engine Murders and the Trail of Seven Bells John, from my fourth album, was written at the same time as Spinning the Compass. Lines Overheard at a Séance is most definitely part of that narrative. Indeed if you've heard my most recent EP, Black Water you will have heard the musical echoes of this in 'Ghosts in my Dreams'.

This version of the album also includes two new tracks 'The Man Who Learned To Fly' and 'Lines in the Dirt' both of which I wrote at the time but didn't have time to finish recording before I finally got bored and released the album.

This accidental album kicked off a solo 'career' that so far has encompassed 4 albums albums, a few EPs and lots of fun.

"Spinning The Compass is almost a metal album. All Tom would need to do is swap acoustic for electric guitar and the keyboard parts for more electric guitars and he’d be there ... the unexpected quirks and lunges in strange directions never get in the way of a melody or a strong chorus, particularly on the excellent title song and the opener, Mechanism. Buzzing at the centre of this album is Lines Overheard At A Séance, all fuzzy keys and crackling drums. It’s a dark and hypnotic piece,easily one of the best things I think Tom has recorded.:
- Thanks, Tom Hanks! thankstomhanks.tumblr.com

"Nerdish themes of machines and humanity... a neat collection of songs with a really cool sound"
Andrew Liptak - Carry You Away carryyouaway.wordpress.com/2010/02/18/a-geek-interlude/

"Tom Slatter’s Spinning the Compass is best described, I think, as acoustic prog-rock. From alternating measures of 5/4 to wildly chromatic key changes to rowdy (acoustic) guitar solos, all of the prog-rock elements are there... the songwriting is brilliant and the instrumental performances are wonderful."
Rob Weber - Playing in Peoria robntweber.wordpress.com

"Spinning the Compass - 'Quintessentially “steampunk”, and not just because of the subject matter of the songs or how “period” the music is. He nails steampunk by capturing the essence of subtle subversion that it is. The music is weird, but you know what, so is dressing up in goggles and mechanical body parts.'"
- Pikestaff, Clockwork Hare

"Mr. Slatter’s music evokes images of ill-lit workshops, dark libraries in mansions where spirits are contacted, cabaret in run-down theaters and the taste of absinthe."
- The Traveler, The Traveler's Steampunk Blog